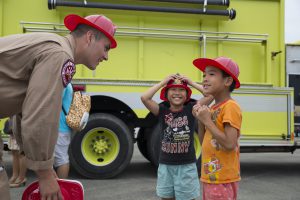 “What do you want to be when you grow up?” We start asking our boys this question at such an early age, as we’re fascinated to hear the answers, aren’t we? We write it down for posterity, we chat about the many possibilities for them, and we definitely encourage them to role play in boys costumes like the ones we’re looking at today!

Role playing has so many benefits. It encourages both independent and cooperative play. Children learn to express themselves creatively, devising stories of their own (narrative thinking). It also gives them room to “try on” something new for fun, and gets them dreaming of what COULD BE! It’s also great for their self esteem, as they can be a real success in a chosen field of play!  (See Boys Dress Up – Role Playing for more on boys dress up in general.)

What follows is a boys dress up collection I had fun selecting after digging around the net… they are 12 of the best selling and highest reviewed boys costumes – all in the theme of “When I Grow Up”.  I hope you really enjoy it, and are able to get some new ideas for your boys dress up play!

By the way, these costumes are also great for your little girls, as careers are not and should not be limited to a specific gender, I believe. That being said, check out Role Playing Costumes For Girls if you want some more feminine ideas! 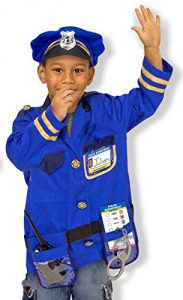 When I grow up, I want to be… A POLICE OFFICER!

It’s a noble profession, but a challenging one. Scary, but oh so important. Especially in today’s world, being a Cop is serious business… and we certainly want so GOOD COPS in our cities… so let’s inspire our boys to rise to the challenge! They’ll have fun looking the part, Protecting and Serving in this awesome police officer role play set from the Melissa & Doug line! Comes with tons of fun perks like the radio, whistle, handcuffs, ticket, name badge, and more! 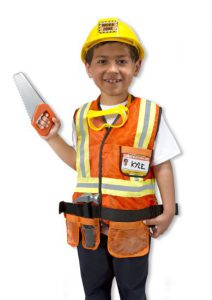 When I grow up, I want to be… A CONSTRUCTION WORKER!

Work Zone ahead! Is your little guy obsessed with construction zones, tractors, and the like? There’s just something about those machines, tools, dirt, lumber, and whatnot that just scream “get in there!” too our little guys, isn’t there?

This role play set comes with all the gear he’ll need to get busy building and fixing all over the house and yard! Comes with everything you see in the pic (except the pants and white tshirt). 🙂 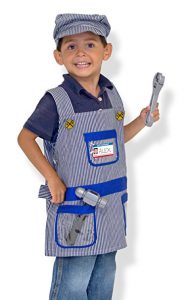 When I grow up, I want to be… A TRAIN ENGINEER!

All aboard the train heading towards adventures in Playland! This awesome Melissa & Doug role play train engineer set will inspire some serious play time. Does your boy have a love for trains? Does he have his own railroad set? Outfit him in THIS and watch him come to life as a real train engineer, fixing the tracks, organizing the railroad, and basically, trying on a fun career for size. 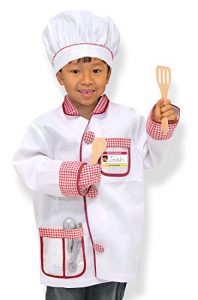 You  might think this chef’s costume looks girly, but read the reviews on it and see that it’s definitely for boys too… little guys also LOVE to cook and bake with their moms or dads, and play Cooking Shows too.

This is a machine washable, well-made cloth costume, again by Melissa & Doug… good for LOTS of messy “real” food play and “fake” food play! And it comes with the fun utensils you see here as well. 🙂 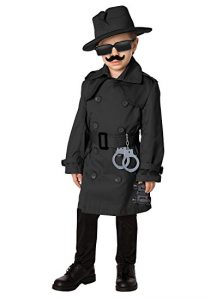 This spy outfit can inspire lots of creative dress up play, as well as trigger the idea of detective work later on in life! 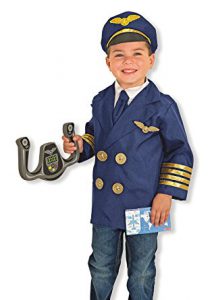 When I grow up, I want to be… an AIRPLANE PILOT!

“This is your captain speaking! We’re ready for take-off!” Dress up play will be taking off too when he’s wearing this awesome Airline Pilot costume! He’ll have so much fun setting course, flying his passengers to their destinations safely and speedily!

⇒ CLICK HERE to check out details! Rated 4.3/5 stars by over 25 reviewers!

When I grow up, I want to be… a RACE CAR DRIVER!

Does your boy have a NEED for SPEED? Does he dream of being a race car driver when he grows up? Is he ready to win the Formula One, or take over Nascar? Ok, I won’t pretend to know anything about car racing, but I do know that little boys are often VERY drawn to it. Maybe it’s the fascinating cars… maybe it’s the glitz and the glamor (guy style), maybe it’s the speed… whatever it is, having a stylish race car role play costume and accessories in your dress up box will be a BIG hit.

When I grow up, I want to be… a SOLDIER!

If your boy is into “all things army”, and dreams already of serving our country as a soldier, this might be the dress up costume he’ll just LOVE. He’ll have a great time pretending he’s a real marine or soldier, dodging the bad guys, rescuing those who need help, and fighting the enemy in this authentic looking camo suit!

⇒ CLICK HERE to check out details! Rated 4.1/5 stars by over 50 reviewers! 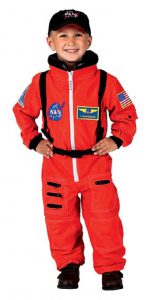 When I grow up, I want to be… an ASTRONAUT!

This is THE space suit dress up outfit you’ll need to look at if your son loves all things space related. Why? Because it’s THE space suit costume seen at NASA, THE SMITHSONIAN INSTITUTE, SCIENCE MUSEUMS and CHILDREN’S MUSEUMS around the world. Yep, that’s right… it’s actually an award winning costume! Check out the reviews… parents and kids love it.

So is your son ready to blast off to the moon, or further… to the stars?! Outfitted in this amazing astronaut costume by Aeromax, he’ll be dreaming of a career in space travel for years to come!

When I grow up, I want to be… a FIREFIGHTER!

The Classic. Which boy at some point in his early childhood does NOT have a dream of being a firefighter, jumping on a big red firetruck whose lights are flashing and siren screaming, performing daring imaginary rescues… it’s almost a childhood right of passage. And every boy needs a firefighter hat, at the very least, to role play with. Right?

This costume takes it a few notches higher than your average firefighter outfit. It’s pretty amazing. And realistic. Check it out for sure if your boy has more than just a little interest in fire fighting. It’ll definitely “fan the flames” of his imaginary play! 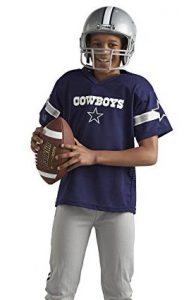 When I grow up, I want to be… a FOOTBALL PLAYER!

This is a BIG one for so many little boys, so have you as a parent ever thought of making sports gear like jerseys and dress up helmets part of your boy’s dress up collection?? He might not consider sports gear as dress up, but it totally is!! He’ll have fun impersonating his heros, scoring touchdowns of his own, and may just wear it around the house and outside regardless of whether or not he considers it play.

This Franklin Sports outfit is customizable. You can select his favorite team, pick the jersey number and colors… get his favorites and he might just never take it off. Comes with a dress up helmet, elastic waisted pants, and the jersey (iron on numbers). He’ll be ready to win the Superbowl!

Ok, Moms and Dads… which one of you doesn’t secretly love the idea of his son becoming a doctor or surgeon some day? I highly doubt I’m the only one.

Many children love to play doctor, nurse, veterinarian, or surgeon – and they’ll really feel the part in this very realistic, excellent quality set of scrubs. Add a kids medical kit and he’ll be ready to start helping his long line of patients, including, of course, you.

Aren’t these costumes just fabulous?? I love how our boys can really begin to dream big while dressed up in these career role playing clothes. Boys costumes sure don’t have to be all about gore and fright – there’s so much more!

For some other interesting dress up stuff specifically aimed at boys, check out these pages!

Thanks for reading, and please let me know what you think below! Do you encourage “When I Grow Up” themed dress up for your boys? Do they LIKE it? Or do they gravitate towards Superheroes and Adventures pretty quickly? 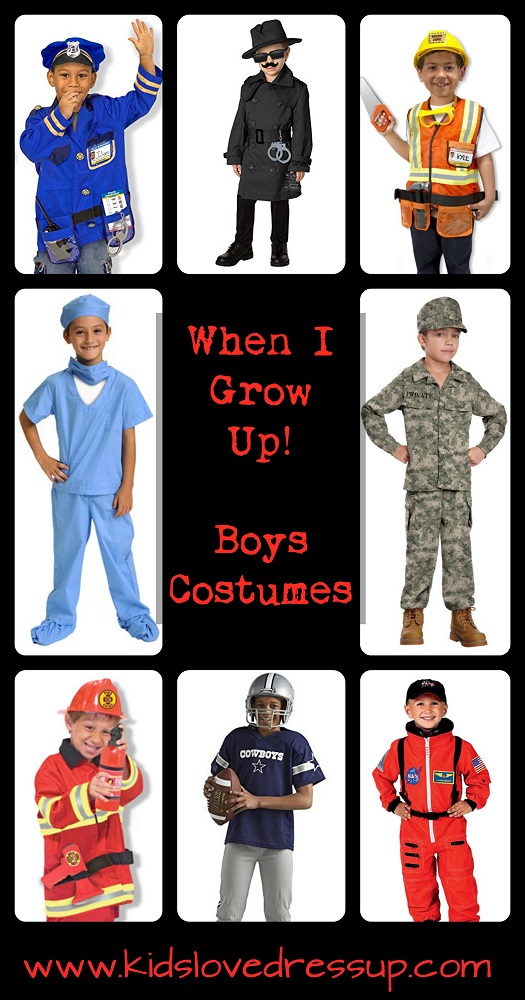 Alice In Wonderland Costumes For Kids: Fantastic Options!
Princess Dress Up Shoes: She Needs Some Shoes To Go With Her Gown, Mom!

14 thoughts on “Boys Costumes: “When I Grow Up” Career Costumes That He’ll Be Proud To Wear!”