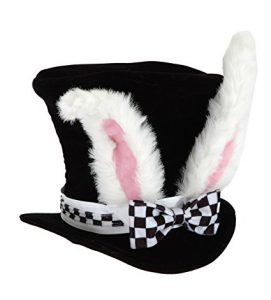 It’s a whimsical adventure, taking a trip down the Rabbit Hole! Alice doesn’t know what she’ll find, where she is, who she’ll meet, or just what’s going to happen!

Welcome to this page about Alice In Wonderland Costumes for kids!

Alice In Wonderland, based on Lewis Carroll’s 1865 classic fantasy story Alice’s Adventures in Wonderland is a beloved story, adapted into animated film by Disney in 1951, and then readapted/sequelled in 2010 by Tim Burton – the well known Johnny Depp version.

, and it’s PERFECT for kids who love crazy adventures, nonsensical and puzzling confrontations.

It’s also perfect for kids who love dressing up. And adult too, especially those who are really into cosplay, but as this site is all about KIDS dress up, this page is all about Alice In Wonderland KIDS costumes and accessories!

There are so many to choose from, and so many that will trigger hours of imaginative play!

I’ve done some digging around to save you some time and come up with over 50 fabulous Alice In Wonderland costume and accessory options all focused around the characters and Wonderland theme. Have fun browsing! Now, hop to it!

What is Alice In Wonderland? 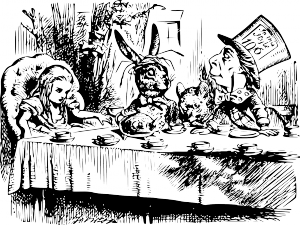 In 1865, an English mathematician named Charles Lutwidge Dodgson wrote a story called “Alice’s Adventures In Wonderland” under the pseudonym Lewis Carroll. The story has been commonly shortened to simply, “Alice In Wonderland”.

It’s a story of a girl named Alice who falls through a rabbit hole into a strange fantasy world. On her adventures there, she meets such odd and interesting creatures and characters as the Cheshire Cat, the White Rabbit, the March Hare, Tweedle Dee and

Tweedle Dum, the Mad Hatter, the Queen of Hearts… characters that have become famous in and of themselves.

Alice grows and shrinks, is in grave danger multiple times, gets lost, gets confused, makes new friends, shows herself to be brave, resourceful and loyal, and generally, has an incredibly grand adventure.

The story is one that plays around with the ideas of nonsense and logic, and as such, as become a story that adults love just as much as children do.

In 2010, Tim Burton released another movie version of Alice In Wonderland in which now 19 year old Alice returns to the “Underland” of her youth, where she gets involved in the plot to overthrow the Red Queen, and replace her with the rightful queen. Alice is reunited with her old friends and meets some new ones too!

Tim Burton’s movie provided dress up lovers with many new costume possibilities. Johnny Depp as “The Mad Hatter” is one of the most popular ones, but the villainous Queen of Hearts is equally fun and the outfit possibilities for both are interesting and endless!

Are you intrigued by the crazy and silly happenings in “Alice In Wonderland”? Does your child enjoy the story? What do you think? Is it and should it be a hit?

Chime in below and let me know what is your child’s favorite Alice character costume!

Dress Up Games for Girls – The Non-Screen Kind
Boys Costumes: “When I Grow Up” Career Costumes That He’ll Be Proud To Wear!

8 thoughts on “Alice In Wonderland Costumes For Kids: Fantastic Options!”